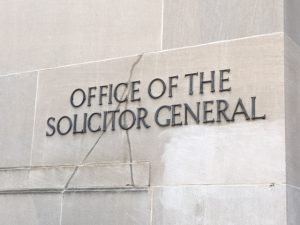 Office of the Solicitor General (photo by David Lat).

Ed note: This article first appeared on The Juris Lab, a forum where “data analytics meets the law.”

The Solicitor General (SG) is the top attorney in the United States government’s arsenal. This attorney regularly argues the most important cases before the Supreme Court and along with other attorneys in the Office of the Solicitor General (OSG), argues more cases before the Supreme Court each term than any other entity. There is also a documented relationship of trust between the SG and the justices that transcends the normal bounds of the justices’ rapport with attorneys.

One of the SG’s duties is filing cases for the Supreme Court to hear, and the SG generally has a high success rate on cert (Finding Certainty in Cert: An Empirical Analysis of the Factors Involved in Supreme Court Certiorari Decisions from 2001-2015). There is some evidence both anecdotally and from the previously cited article that former SGs perform well above average on cert to the Supreme Court. We should expect them to do so given that they were selected for the OSG due to their prowess as attorneys and had access to internal dynamics of the Supreme Court litigation process in ways that are unavailable to those without such repeat player experience.

Currently, many former SGs return to private practice after their stint in the OSG is complete and use the tools they developed in the OSG to aid in their success.  Along with a handful of other attorneys who are highly successful on cert and at arguing before the justices, these former SGs make up what is colloquially known as the Supreme Court Bar of experienced Supreme Court attorneys (Advocacy Matters Before and Within the Supreme Court: Transforming the Court by Transforming the Bar; The Echo Chamber).

This is the first in a series of posts that will dissect cert success and take a look at the impact of the Supreme Court Bar. This post in particular looks at the relative success of former SGs who are currently in private practice. To begin, it is worth highlighting the justices’ extreme selectivity in choosing cases to hear argued before them.  Data from the Federal Judicial Center for the 1990 through 2017 Terms shows just how unlikely the Court is to grant any given petition. 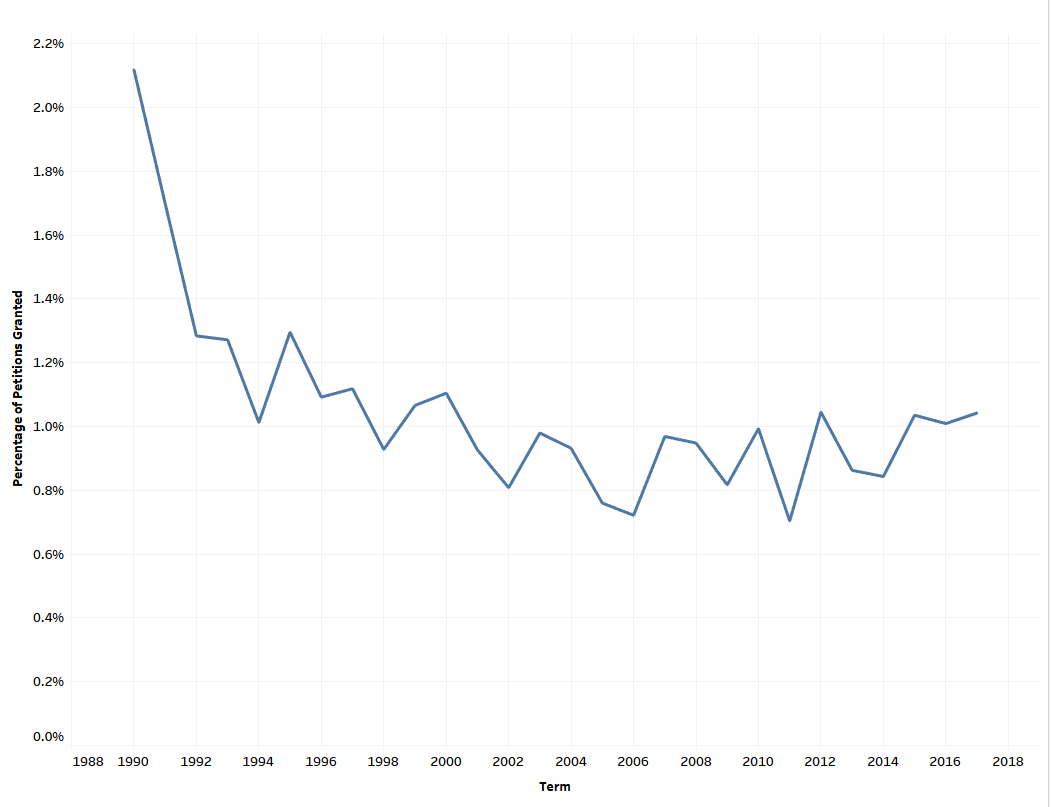 From a high of granting 2.2% of petitions in 1990, the Court has settled at granting around 1% of petitions for argument over the past several decades. The FJC data does not break down the petition grants for this period by whether or not they were filed in forma pauperis, meaning by individuals who could not afford the filing fees, and in forma pauperis petitions tend to be granted at a much lower rate than paid petitions.

The data are from petitions filed between January 2017 and December 2020 that include one of the former SGs’ names on the cover. Former SGs in practice prior to the Trump Administration, including those who were known as acting but were never appointed through the confirmation process, are shown below: 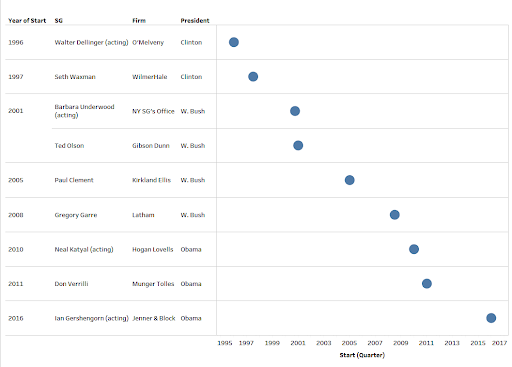 All but Barbara Underwood are currently in private practice.

Looking at the attorneys in private practice, there is quite a bit of variation in their filing of cert petitions. 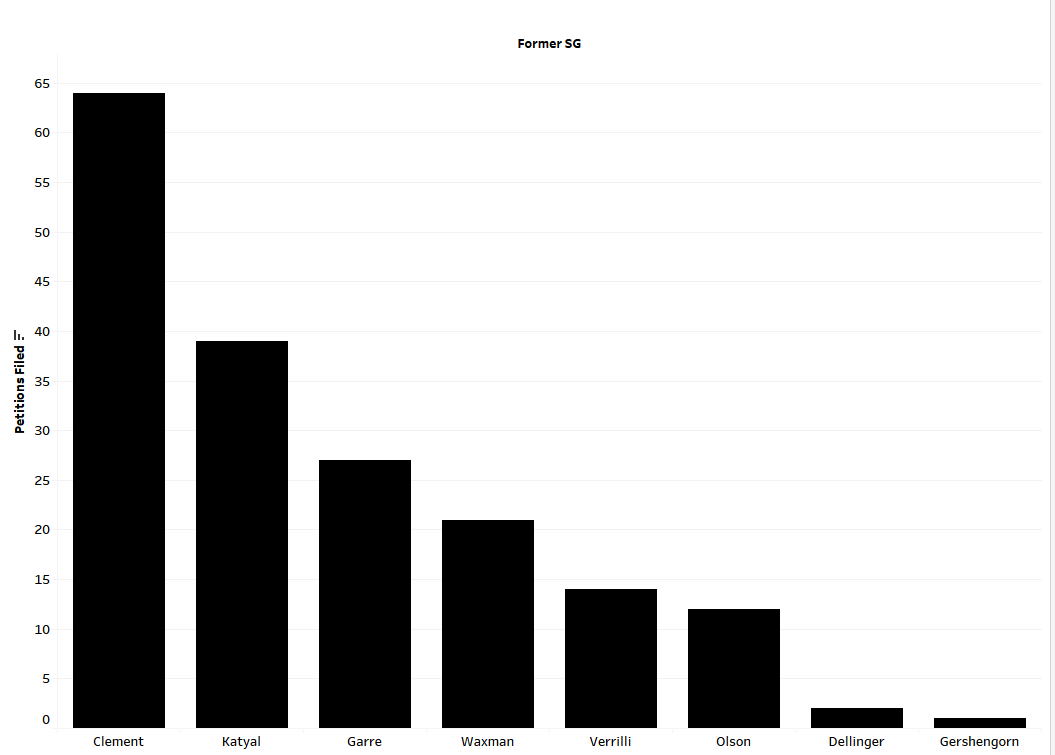 Paul Clement’s 64 petitions during this period more than doubles all other former SGs aside from Neal Katyal.

Of these attorneys Paul Clement has three petitions still pending from this period and Neal Katyal and Don Verrilli both have two.  The Supreme Court also occasionally summarily grants petitions, vacates the lower court decision, and remands the decision to the lower court (GVRs). This process is generally based on other decisions the Court makes in related cases. Clement had five GVRs during this period, Katyal had two, and Verrilli, Seth Waxman, and Ted Olson each had one.

Now for the grant rates. This chart excludes Walter Dellinger and Ian Gershengorn whose two and one petition filed respectively were not granted by the Court.  It is based purely on grants divided by the sum of grants and denials. 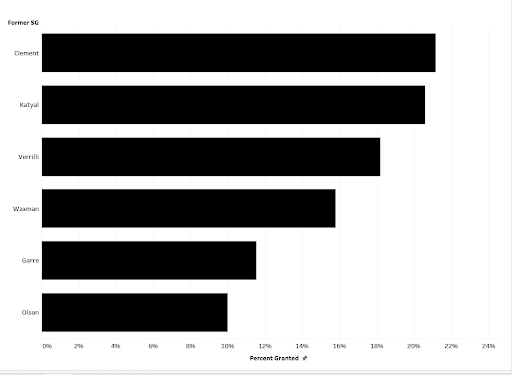 At 21.2% and 20.6% grant rates for their petitions, Paul Clement and Neal Katyal have the extreme distinction of surpassing the 20% threshold for petition grants relative to denials (petitions dismissed before the Court rendered a decision were removed from the set). The cumulative performance of these former SGs on cert showcases that the justices pay attention when they file petitions for cert.

Read more at The Juris Lab …