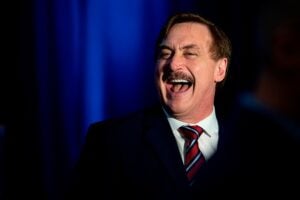 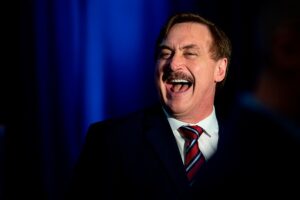 Cheese it, guys! The Pillow Man is on to us!

He knows that we’re all just bots and trolls, pointing and laughing at his RICO suit against Dominion Voting Systems because someone paid us to. Sure Lindell filed a complaint in Minnesota alleging that Dominion is a government actor who violated his civil rights by suing him for defamation in DC. But we’re all just pretending to be shocked that Alec Beck, a (former) partner at the heretofore well-regarded law firm Barnes & Thornburg, put his name on this POS suit. You know, for the money!

Mike Lindell yesterday complained that the attorney he hired to fire the counter-suit against Dominion was fired by his firm because “bots and trolls” attacked the firm. He then says he has hired a team of people to track down the “bots and trolls” and go after them. pic.twitter.com/7vGqLukNtI

So far, so cogent.

“Well they were attacked by bots and trolls and emails and everything, after this was filed last Thursday,” he went on. “On Friday morning they fired the attorney that had signed it.”

Wow, those bot emailers work fast! They almost had us fooled into thinking this was an organic expression of horror mixed with uncontrollable giggles that someone who had been practicing law long enough to know better would ask a federal court in Minnesota to rule that a suit filed in DC constitutes defamatory RICO.

“The fired him and said ‘We didn’t know anything about it,’ huffed Lindell. “Well, what’d I give you the check for? You know, I mean, this is crazy.”

Indeed, that is an interesting question. How the hell did this happen? Announcing Beck’s departure, B&T told The American Lawyer that the complaint was filed “without receiving firm authorization pursuant to internal firm approval procedures.” ATL’s Joe Patrice suspects that this is a byproduct of an industrywide “eat what you kill” culture which creates incentives for partners to prioritize their own, short-term financial gain over the longterm reputational health of the firm.

But the Pillow Fellow is having none of that. This is a case of paid saboteurs, and he’s gonna get to the bottom of it.

They were so fearful of attacks by these bots and trolls. So you know what I’m doing? I just spent another — it’s a lot of money, I’m not going to say how much —  on a whole ‘nother team of investigators to find out who hired those bots and trolls. I’m going to get to the bottom of all this. These people that hire these attack groups — I mean, they went right after the law firm. These guys didn’t do nothin’! We were using ’em just to sign the thing. I mean, the other attorneys, we’ve had for three months.

No doubt B&T appreciates Lindell telling the world that the firm is in the business of trading signatures for cash.

And speaking of cash, we do indeed get paid to make fun of gobbledygook legal filings. But we’d have laughed at this one for free, honestly. What else can you do when confronted with something so manifestly ridiculous?

Ah, well. Mike Lindell knows where to find us.

Elizabeth Dye lives in Baltimore where she writes about law and politics.