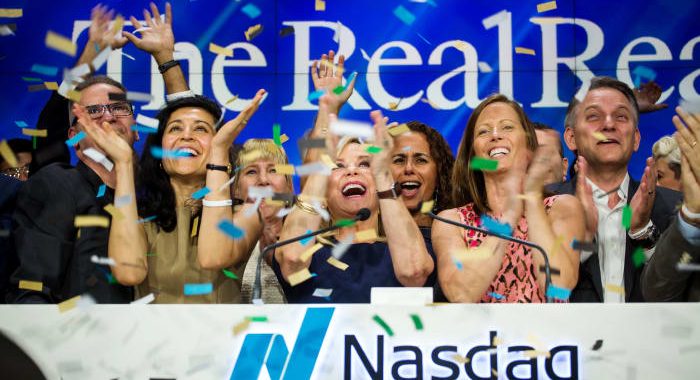 The last 11-odd months in fashion have been unprecedented in its challenges, which, at times, have appeared almost insurmountable. On every rung of the supply chain ladder, players from artisans to consumers have wondered, well, where do we go from here?

But there’s at least one narrative that tells another story of stability.

During this same period, headlines began creeping in announcing a spate of initial public offerings. To IPO, of course, typically signifies that a company is in a position that’s financially solid enough to both front the many necessary legal, accounting and marketing costs and even more importantly, to risk failure that required funding may not be raised. So far in 2021, Mytheresa, Poshmark and ThredUp have either already debuted on the public exchange, or quietly filed to do so. Just last month, Mytheresa and Poshmark both crushed their valuations: Mytheresea raised $407 million after pricing shares at the top of its marketed range, while Poshmark’s own shares climbed 141.7% to $101.50 during its first day on Nasdaq.

Poshmark’s case is a definitive success story. With a market capitalization of $7.4 million, the social-selling platform is now theoretically “worth more” (per the stock the market’s valuations, at least) than some of fashion’s most established public fixtures, like Macy’s Inc. (with a market cap of $4.3 billion), Nordstrom Inc. ($6 billion) and Michael Kors, Versace and Jimmy Choo parent Capri Holdings Ltd. ($6.6 billion).

That investors want in on retail is quite clear — but fashion and Wall Street have not always been as harmonious as the previous paragraph may lead one to believe. Take Mytheresa’s London-based luxury e-commerce competitor Farfetch, which opened at a respectable $27 a share in 2018, but soon after dipped below $20 and later, to around just $11 after the company reported lackluster quarterly earnings.

So, what does it mean to IPO a fashion business in 2021? And is it set to become a more popular move in the future? Read on.

Fashion and Wall Street have history

The relationship between fashion and Wall Street is well-encapsulated by the Versace episode of the 1990s.

In 1997, the privately-held fashion empire was within months of taking its company public when Gianni Versace was shot and killed outside his Miami Beach home. As Gianni’s siblings Santo and Donatella assumed control of the label, both reportedly remained dedicated to entering the public exchange, and sought to skip the Milan stock market for the New York Stock Exchange.

Yet the IPO never surfaced — until years later in 2014, when the family company sold a 20% stake to Blackstone Group LP to help finance another IPO, again. Instead, Michael Kors bought Versace in 2018 for a whopping $2.12 billion.

Meanwhile, around the time of the 2018 Michael Kors deal, a wave of companies began seeking their own public aspirations. 2019 saw successful IPOs from Revolve, Levi Strauss & Co., The RealReal and Kontoor Brands, Inc., which owns and operates Wrangler, Lee and Rock & Republic. The RealReal was the year’s crown jewel, raising $300 million with stock priced at roughly 40% above the company’s $20 IPO pricing. (At press time, the resale company now finds its shares around $27, but as recently as this past December, shares hadn’t gotten above $15 in a full year.)

“The markets are fickle and can be swayed day-to-day, or even hour-to-hour,” says Thomaï Serdari, adjunct professor of marketing and director of the Fashion & Luxury MBA at New York University’s Stern School of Business. “That’s why retail experts are trying to block out the market noise and base their bets for longevity on consumer trends and business models.”

Why are so many businesses looking to go public now?

As Serdari explains, the figures endorsed by Wall Street don’t often tell the full story. What’s missed between the digits and dollar signs, she says, is the context within which companies grow and make an emotional bond with their shoppers. All of this is to say, then, that the pandemic has actually accelerated trends that have been taking hold for some time now, like e-commerce and sustainability, but also more nebulously, authenticity.

“What has been happening in retail started at least 10 years ago, if not longer,” says Serdari. “As many businesses are moving online, they’ve been trying to grow their e-commerce, which has been growing really substantially in the last years. With COVID, all of these factors have accelerated and made people see the opportunity, especially in the last year and a half, to also accelerate that strategic direction for their own companies.”

Now a year-plus into this pandemic, fashion retailers have gone from effectively treading water to reconsidering entire business plans. We saw this in the case of climate consciousness, for example, wherein companies have been forced to shift to more effectively cater to changing consumer habits. With the pandemic tightening shoestrings for a vast number of Americans, many shoppers have taken to shopping more locally and/or upcycling items — activities that are good for reducing emissions associated with shopping and production.

Financially speaking, the effects of the pandemic have also impacted the expectations retailers may have of their customers. In the past, Serdari says, companies relied more strictly on what she calls a “top-down authoritative decision-making process” that didn’t allow the consumer to have much say in what they want from the brand itself or what they’re going to find in-store. No longer, because all-powerful millennial– and Generation Z-aged consumers won’t allow it.

“First of all, the customer has changed a lot,” says Serdari. “It’s not only the younger generations who are increasing in volume. The younger customers are also influencing how older people shop, and how they go to retail markets.”

Now, the so-called “old-fashioned” way that companies might relate to their customers may, in fact, lead to a fair amount of risk when pursuing the public markets. In order to even respond to the demands of shareholders after the IPO, retailers can almost certainly plan on scaling up their operations — and doing so quickly, perhaps without developing a rigid strategy around which aspects of operations are being scaled.

Related Articles:
All the Ways to Finance a Fashion Business
Incubators Are Back — and Good Thing, Because Fashion Really Needs Them
Cryptocurrency Is Coming for the Beauty Industry

Today, social media and e-commerce analytics have much of that research already built into the very infrastructures of the platforms themselves. So if the primary goal in a company going public is to expand its own business and therefore expand its customer base, it’s of enormous benefit to build an authentic connection with shoppers, so brands can truly address every desire in the retail space.

“I think everyone sees that opportunity, and it’s the perfect time for them to jump in if they haven’t already,” says Serdari. “If they can boost up the way they do their business from the e-commerce side of things, they’ll be getting the more information on their true customers — people who not only browse their sites, but actually complete sales on their sites. And by getting more information about these personas, companies can then start thinking about brand extensions or categories that they want to enter.”

With an IPO, are there any concerns?

Mytheresa had a strong NYSE debut right out of the gate, having listed the 15.6 million shares it planned to sell at higher than its original price of $16-18. With significant investor demand, it’s the latest luxury e-tailer to become a Wall Street success story.

Theoretically, wouldn’t investors also be considering the crowdedness of this market — and of any market, for that matter? Though Mytheresa and a rival retailer like Farfetch reflect different consumer groups, as well as different benefits to interested shareholders, they’re still two cogs in an industry wheel that isn’t all that big.

Serdari has found that the public exchange allows ample space for up to five large-scale competitors, with even more room for smaller, more niche businesses to fill any gaps left by corporations. Although it’s a global marketplace, consumers are still privy to regional and cultural biases that retailers can reflect in their own strategies, from their visual marketing to the actual product buy.

“Mytheresa came out of Munich and had a traditional retailer relationship with their local community, but they slowly expanded, then moved onto an e-commerce platform and continued expanding,” says Serdari. “This tells me that the e-commerce industry cannot be a blanket solution. In other words, we cannot all buy from Net-a-Porter, we cannot all buy from MatchesFashion. There are different pockets of culture that demand different ways of merchandising.”

Analysts warn there’s a limit, however. At the start of 2020, many direct-to-consumers startups were preparing for their venture-backed bubble to burst. Companies that had previously banked millions in Series A, B and C rounds were preparing to “hit a revenue wall” if they didn’t differentiate themselves in some way or another from their (many) peers, and fast. While the pandemic has granted the startup sphere a bit of a reprieve, funders and founders alike remain on high alert for the other shoe to drop. Could a rise in IPOs from fashion-adjacent businesses signal the same fate?

Retailers may have divested from the “top-down authoritative decision-making process” Serdari referenced earlier, but by and large, analysts haven’t. That dissonance could hinder said analysts from correctly assessing the values of campaigns that want to put forth an IPO, which, if unchecked, could lead to another popped bubble.

In business, it never exactly hurts to have a crystal-clear value proposition that makes a company or product attractive to shoppers. The public exchange may indeed support up to five competitors, but even still, a retailer’s value proposition is necessary in helping to define a unique foothold in the marketplace. And this is as lucrative for the benefit of everyday consumers as it is for formal investors.

“This is where things get very competitive because sometimes companies rush into this market without a value proposition that clearly states the new aspect they bring to market, or what is, so to speak, the solution they bring to their ideal customer,” says Serdari. “That’s a problem that has persisted in the way brands present themselves, how businesses set up retail stores. This is the most difficult thing, but if you get that right, then you can very easily grow the business in terms of customers, which is a golden ticket when preparing for an IPO.”

By that definition, according to Serdari, Goop is extremely well-positioned for an IPO. Its $95 peach-pink vibrators may already be courting investors: In September, private equity partner and LVMH executive Ravi Thakran filed paperwork for a new “blank-check company” called “Aspirational Consumer Lifestyle Corp.,” which is reportedly looking to raise $225 million to invest in “businesses with premium brands that offer an aspirational lifestyle experience to consumers.”

Blank-check companies (also known as special purpose acquisition companies, or SPACs) have become favorable, back-door ways to take companies public without the burden of operations and assets, according to PricewaterhouseCoopers.

“There aren’t a lot of private companies that fit the description here,” one Wall Street banker who follows SPACs told financial journalist Thornton McEnery this fall. “Goop fits, and it has a big enough profile to make SPAC investors happy.”

Not many retailers enable — encourage, even — shoppers to peruse four-digit gemstone heat therapy mats while simultaneously reading about antepartum depression. But such is Goop’s value proposition, carefully honed over a decade with an involved community that doesn’t scoff at vagina-scented candles as much as one may think. And this is exactly what an IPO is all about.