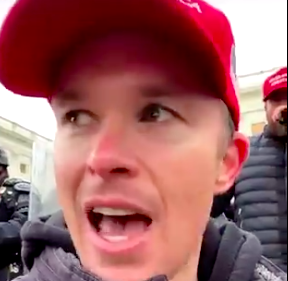 Oh, Paul Davis. I just don’t know how to quit (writing about) you. What is it about the Hobbit-loving, Capitol-insurrectionist attorney that keeps me coming back for more? His propensity to get fired? His prolific filings of batshit legal theories? The way he gets butt hurt when people make fun of him? No, it’s definitely D, all of the above.

After the now-former general counsel got fired after participating in the January 6th riots, you’ll recall he filed a lawsuit seeking to undo the entirety of the 2020 election because of violations of the Help America Vote Act (HAVA) which, in turn, begat civil rights violations. Yes, in follow on filings he cited every nerd’s first love J.R.R. Tolkien for the notion that the United States could be ruled by a steward and we all laughed (with good reason) at that. But eventually he was fired by some of those plaintiffs over a disagreement over legal strategy, and he filed a second lawsuit, that the internet is calling In Re Gondor II but is really Bravo v. Pelosi, reiterating the causes of action from his first lawsuit.

But Davis’s feelings got hurt again when people (again, rightly) started dunking on his TRO application in Gondor II. And just like his favorite (probably) president, Davis took to Twitter to express his anger:

I love how no one can actually find a legal flaw in the argument. “Oh, the remedy is insane” you say? What’s insane is having two unconstitutional branches of government. Anyway, I have work to do, so I’ll let you basement-dwellers get back to your video games.

UMMMM “no one” finds a “legal flaw” in Davis’s argument except for the FEDERAL JUDGE APPOINTED BY DONALD TRUMP. Judge Alan Albright literally said the causes of action in the original complaint — the exact same ones Davis doubles down on in his second complaint — are “without merit” and gives real life legal analysis to boot:

Here, the Court finds that Plaintiff’s claims are without merit, because the federal statute under which they seek relief do not permit them to sue Defendants to restrain Defendants from “participating in any action relating to the process of electing public officials, holding public office or any official government position, or position in any partisan enterprise related to American politics, and from defaming or threatening or otherwise interfering with the life, liberty, or property of Plaintiffs.” Pls.’ Compl. Plaintiffs have not pleaded sufficient facts to state a claim to relief that is plausible on its face under either the Help America Vote Act (HAVA) or § 1983.

But far be it from Davis to listen to the legal advice of Judge Albright — the judge is saying in as clear language as possible that the case is a stinker. But Davis persists, and just continues to spew utter nonsense to the interwebs:

Let me be clear. The problem everyone has with “Bravo v. Pelosi” is merely that the remedy is too big for minds to grasp. There is nothing wrong with it legally, which is why we will likely will not get relief till the PI hearing, which is when everyone will stop laughing.

I can’t imagine there’ll ever be a time I’ll stop laughing at this nonsense.

Kathryn Rubino is a Senior Editor at Above the Law, and host of The Jabot podcast. AtL tipsters are the best, so please connect with her. Feel free to email her with any tips, questions, or comments and follow her on Twitter (@Kathryn1).